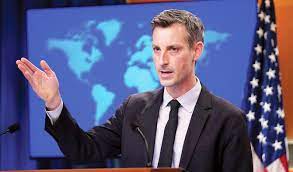 US Continues to Support Direct Dialogue Between India and Pakistan: Ned Price

WASHINGTON– The United States stands for direct dialogue between India and Pakistan on  the concern issues, a State Department spokesman said Tuesday.

The Spokesman, Ned Price, was responding to a question from an Indian correspondent who sought comments on the Pakistani Cabinet decision not to import sugar and cotton from India.

“I wouldn’t want to comment on that specifically,” Prince said at his daily news briefing. “What I would say is that we continue to support direct dialogue between India and Pakistan on issues of concern,” Price added.

Pakistani Foreign Minister Shah Mahmood Qureshi said after last week’s Cabinet meeting, chaired by Prime Minister Imran Khan, that trade with India will remain suspended until New Delhi reverses a 2019 decision under which Jammu and Kashmir was stripped of its special constitutional status.

Pakistan Records 149 New Deaths Due To COVID-19 On Sunday