We Are On ‘Different Paths’, Prince Harry Acknowledges Tensions With His Brother William For Ist Time

LONDON– Britain’s Prince Harry has acknowledged tensions with his older brother Prince William for the first time, saying they are on “different paths.”

Harry made the remarks in an interview with ITV’s Tom Bradby, recorded during the Duke and Duchess of Sussex’s recent trip to Africa. The interview was part of an hour-long ITV documentary that aired Sunday.
Bradby asked, “There’s been a lot of news in the press about rifts with your brother. How much of that is true?”

Harry answered, “Part of this role, part of this job, this family, being under the pressure which it’s under, inevitably stuff happens. But we are brothers. We will always be brothers.
“We are certainly on different paths at the moment, but I will always be there for him, and as I know he will always be there for me. We don’t see each other as much as we used to as we are so busy. But I love him dearly and you know the majority of the stuff is probably — well, the majority of the stuff is created out of nothing. But as brothers, you have good days and you have bad days.”
There have been tabloid rumors of a rift between the brothers, but more often those rumors concern the brothers’ wives, Meghan, Duchess of Sussex, and Kate, Duchess of Cambridge.
The alleged rift has been cited as one of the reasons Harry and Meghan moved out of Kensington Palace in May, but a CNN source close to both duchesses said it had more to do with Harry wanting greater independence and William needing his own team in preparation for the change of reign, when their father becomes king.
At a royal foundation event in February 2018, Harry and William suggested that if there were any disagreements, they were between the brothers and not the wives. 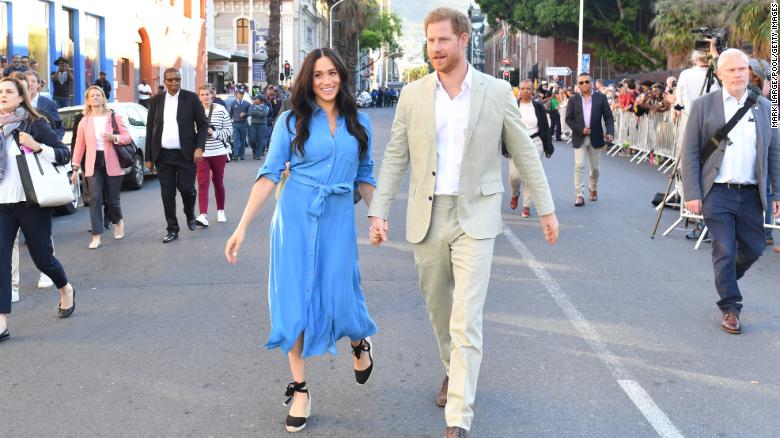 Meghan and Harry visit Cape Town, South Africa, during their royal tour of Africa in September.
The ITV documentary included an interview with Meghan in which she gave a rare glimpse into her personal life, admitting she has struggled to deal with being a new mother in the spotlight.
Meghan, Duchess of Sussex, holding back tears: ‘Not many people have asked if I’m OK’
“Any woman, especially when they’re pregnant, you’re really vulnerable, and so that was made really challenging,” Meghan said in the video. “And then when you have a newborn, you know. And especially as a woman, it’s a lot. So, you add this on top of just trying to be a new mom or trying to be a newlywed.”
Meghan became emotional when Bradby asked her about the impact it has had on her mental and physical health.
“Thank you for asking. Not many people have asked if I’m OK, but it’s a very real thing to be going through behind the scenes,” she said.
When the reporter asked Meghan whether that meant she wasn’t OK, and that it “really” has been a struggle, the former actress simply said “Yes.”
SOURCE: CNN INTERNATIONAL
'Different Paths'different paths at the momentPrince HarryPrince William
273
Share

US Sanctions 4 ‘Russian-backed’ Individuals for Allegedly Working to…