LAHORE MIRROR (Monitoring Desk)– One of France’s most famous landmarks- the medieval Cathedral of Notre-Dame in Paris- engulfed by huge flames following a huge blaze on Monday, officials said.

Firefighters are still trying to douse flames to save the 850-year-old Gothic building, but its spire and roof have collapsed.

The cause is not yet clear, but officials say that it could be linked to renovation work.

A Paris fire official said the main structure had now been “saved and preserved”.

The Paris prosecutor’s office said it has opened an inquiry into “accidental destruction by fire.”

Loud bangs could be heard as flames burst through the cathedral’s roof, also destroying its stain-glass windows.

All efforts are now being put into saving the cathedral’s artwork and preventing the collapse of its northern tower.

Thousands of people have gathered in the streets around the cathedral, observing the flames in silence. Some could be seen openly weeping, while others sang hymns or said prayers.

Several churches around the French capital have been ringing their bells in response to the blaze.

French President Emmanuel Macron, who has arrived at the scene, said his thoughts were with “all Catholics and all French people.”

“Like all of my countrymen, I am sad tonight to see this part of us burn.” 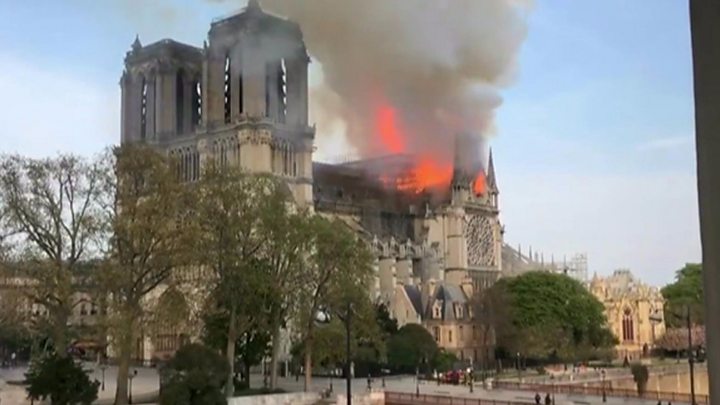 Mr Macron had earlier cancelled an important TV speech to the nation because of the fire, an Élysée Palace official said.

A spokesman for the cathedral said the whole structure was “burning”.

“It remains to be seen whether the vault, which protects the cathedral, will be affected or not”, he said.

“For 800 years the Cathedral has watched over Paris”, he said.

“Happy and unfortunate events for centuries have been marked by the bells of Notre Dame.

“We can be only horrified by what we see”.

The mayor of Paris, Anne Hidalgo urged people to respect the boundaries set up by fire crews in order to ensure that they remain safe.