New Zealand has downgraded its tsunami warning after a powerful earthquake struck the Kermadec Islands region early Friday, sparking fears of a tsunami.

The 8.1-magnitude quake was the third to strike the area on Friday morning local time, according to the New Zealand National Emergency Management Agency.
Residents in some areas received emergency alerts on their phones urging them to “EVACUATE NOW,” as tsunami sirens rang out. The emergency agency issued a temporary evacuation order for people near the coast, warning them, “Do not stay at home” as a “damaging tsunami is possible.”

The Kermadec Islands are 500 to 620 miles northeast of New Zealand’s North Island. The East Coast of the North Island from the Bay of Islands to Whangarei, from Matata to Tolaga Bay including Whakatane and Opotiki and Great Barrier Island are all included in the Pacific nation’s tsunami
On Friday afternoon, the agency downgraded its warning from a “land and marine threat” to “beach and marine threat,” meaning all residents who evacuated can now return to their homes.
It added that strong currents and unpredictable surges may continue for several hours, and that people should stay away from beaches, shores and rivers.
The earthquake came “without any significant warning,” seismologist Bill Fry said in a press conference Friday. He added in his 13 years responding to earthquakes and tsunamis in New Zealand, “this is the first time we’ve had this particular sequence.”
In Russell, New Zealand, Rita Baker told CNN that she had evacuated with other residents to a hill overlooking the Bay of Islands.
When the first alerts came about earthquakes in New Zealand, Baker wasn’t too worried, she wrote to CNN. Then the first Kermadec quake struck with little warning.
“An hour after that, the tsunami siren went off and for a split second I went into panic mode,” Baker added. “Just hearing that sound made me get a bit anxious.”
Baker’s home sits 10 meters (32 foot) from the water’s edge. “Next thing my husband called me from his work in town and told me to get out ASAP and go to higher ground, as this was no drill and they were evacuating the hotel (he works at a hotel right on the waterfront),” she wrote. 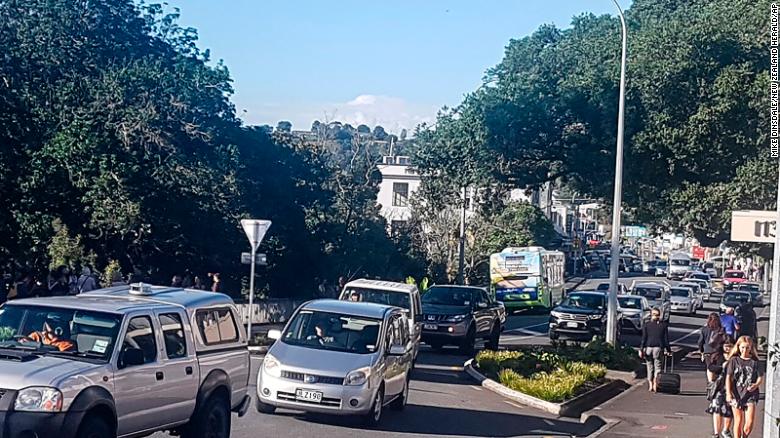 Traffic slowly works up to high ground at Whangarei, New Zealand, as a tsunami warning is issued Friday, March 5, 2021.
“So I grabbed the cat (hiding under the bed) and literally with shaking hands put her in her carry cage and grabbed my handbag and computer hard-drive and got down to the car and drove up the local landmark hill.”
The quake also triggered warnings in Hawaii and in American Samoa, which were later canceled. Australia’s Bureau of Meteorology reported observations of a 64 centimeter (approximately 2 foot) tsunami wave at its remote Norfolk Island.
Thursday’s earthquake was the largest to strike anywhere in the world since August of 2018, when an 8.2-magnitude quake struck much deeper underground, also in the South Pacific, near Fiji.
Only around one or fewer earthquakes of 8.0-magnitude or greater occur each year.
SOURCE: CNN INTERNATIONAL