Mexico: Nine US Citizens, Including Children, Killed in Attack on Mormons

MEXICO– At least nine US citizens, including six children, have been killed in a violent attack by suspected drug cartel gunmen in northern Mexico.

The victims are members of the LeBaron family, linked to a breakaway Mormon community which settled in Mexico several decades ago.

The victims, who also include three women, were travelling in a convoy.

Mexico’s security minister said the group could have been targeted accidentally through mistaken identity.

Family members, who have spoken to the New York Times newspaper, said two of the children killed were less than a year old.

In a Tuesday-morning tweet President Donald Trump described the group as “a wonderful family and friends” who “got caught between ‘two vicious cartels'”.

In a series of posts, he signalled that the US “stands ready” to offer support to combat the problem.

What do we know about attack?

As news of the attack spread, the death toll was at first unclear.

However, family members and Mexican officials have now confirmed that at least nine people were killed.

LeBaron family members were quoted as saying a group of three mothers and their 14 children had set off in a convoy of cars from Bavispe in Sonora state and were heading to La Mora in the neighbouring state of Chihuahua.

They were ambushed by gunmen in Bavispe.

A burnt-out SUV was later found by the side of the road with the remains of some victims and there were reports that other family members were shot at as they tried to flee. 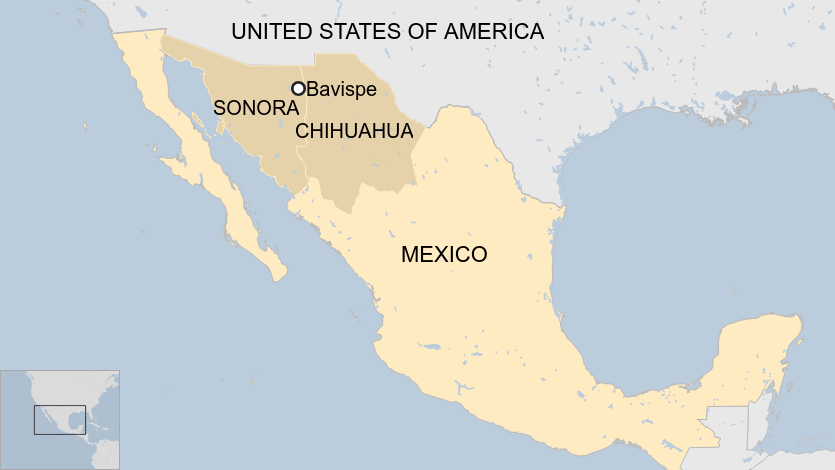 Julian LeBaron, a cousin of the three women, also said seven other children managed to escape the attack.

The attack is thought to be have been carried out by a drug cartel which operates between the two states.

The governments of Chihuahua and Sonora issued a joint statement saying that an investigation had been launched and additional security forces had been sent to the area.

Claudia Pavlovich Arellano, governor of the state of Sonora, described the perpetrators on Twitter as “monsters”.

“As a mother, I feel anger, revulsion and a profound pain for the cowardly acts in the mountains between Sonora and Chihuahua,” she wrote, in Spanish.

Who are the victims?

Twins under the age of one were among the dead, the family said. The other child victims were aged 11, nine, six and four.

The victims are members of a community called Colonia LeBaron which was founded by a breakaway Mormon group in the first half of the 20th Century after the Church of Jesus Christ of Latter-day Saints in the US starting cracking down on polygamy.

The community now includes both Mormons and Catholics who have settled there. Members are known for standing up to local drug gangs and speaking out about the high levels of cartel violence.