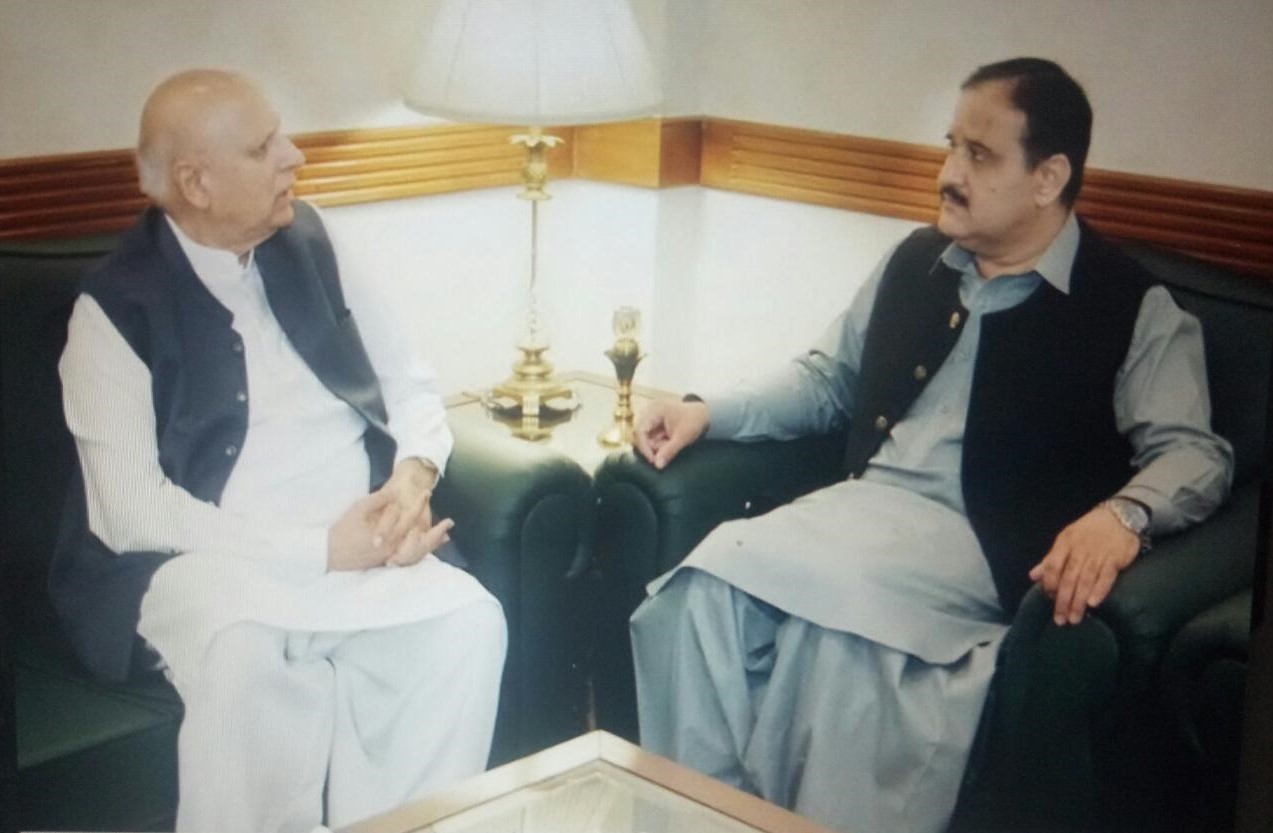 By Admin On Sep 22, 2019
211
Share
LAHORE– Chief Minister Punjab Sardar Usman Buzdar called on Governor Punjab Ch Muhammad Sarwar at Chief Minister’s office on Saturday to discuss matters regarding mutual interest, various development projects and progress on the tragic incident of Chunian.
The Chief Minister and the Governor were strongly condemned Indian savagery and violation of human rights in occupied Kashmir and expressed complete solidarity with the innocent Kashmiri people.
Buzdar said that Punjab government will provide every possible support to the bereaved family of murdered children.
He further maintained that DNA test of suspicious people are being conducted in Punjab Forensic Science Agency and the accused cannot escape from the law. Sections of anti-terrorism have been included in this case and now it will be heard by anti-terrorism court.
He said that government will go to the last extent for ensuring justice to the victim families. Effective legislation will be made for preventing such incidents and every possible resource will be provided to give a secure future to our children. He said that Kashmir and Pakistan were one nation, they are one, and will always be one.
Prime Minister Imran Khan has effectively highlighted the Kashmir dispute at the international level. He said that Kashmiri people are making the historic struggle against Indian occupation. Comity of the nation will have to support innocent Kashmiris besides taking practical steps for prevention of Indian brutality.
He said that Kashmiris are not alone in their struggle as the whole Pakistani nation is standing beside them.
Governor Punjab Ch. Muhammad Sarwar said that we are with the bereaved families of murdered children and all our sympathies are with them. He said that the Pakistani government will continue providing political, moral and diplomatic support to Kashmiri brethren. Governor Punjab congratulated Chief Minister for performing Umrah.

Provincial Minister for Health Dr Yasmeen Rashid called on Punjab Chief Minister at th CM’s office today and briefed him about the measures taken for controlling the dengue and provision of treatment facilities to the patients in hospitals of the province.
The Chief Minister while directing her to run anti-dengue campaign more efficiently, said that all necessary resources should be utilized for the eradication of dengue.

Action will be taken against those officials and officers who will show dereliction of duties in anti-dengue campaign. Action will also be taken on on fake activities as well as against those who are doing merely paper work.
He said that reports of “all is well” will no more be acknowledged and third party audit will be conducted. He said that the performance of anti-dengue teams should be monitored on a daily basis. He said that 100 percent implementation on chalked out plan should be ensured.
He directed that divisional commissioners and deputy commissioners personally monitored the anti-dengue campaign. Dengue patients should provide proper care in hospitals. He warned that all the concerned departments should awake and take practical measures for the eradication of dengue.

Buzdar transferred the deputy commissioner Lahore for not taking timely measures in anti-dengue campaign. A notification has been issued in this regard.
The Chief Minister had expressed displeasure over sub-standard sanitation and cleanliness arrangements, dilapidated conditions of roads, encroachments and for not taking timely measures for eradicating the dengue in Lahore and directed to improve the situation.
Earlier, deputy commissioner Rawalpindi has also been removed from his post for not taking timely measures for eradicating dengue.
He will not tolerate any leniency in anti-dengue campaign, Usman Buzdar warned. He said that people are affecting with dengue and the officers are sitting in their offices this attitude will not be tolerated.
“Officers will have to go to the fields and deliver. Officers not serving the people will not be kept in their offices.”
He said that he is answerable to Allah Almighty and people of the province. Now the action will be taken against those who show slackness in public welfare projects and no concession will be given to anyone in this regard.

Report sought from officers concerned in dereliction from duties

Chief Minister Sardar Usman while taking notice, has sought a report from the concerned officers for showing negligence in public welfare projects.
Chief Minister has expressed displeasure over the sub-standard sanitation and cleanliness arrangements, dilapidated conditions of roads and encroachments around Lahore and Kasur roads.
Chief Minister while taking notice of malfunctioning of street lights from Thoker Niaz Bagh to Doctor Hospital Kanal road has directed to take action against responsible officers. On which LDA authorities have sought a report from the concerned officers.
Explanation notices have been served to Deputy Director of LDA Muhammad Harron Saifi, Assistant Director Raza Hassan Rana, Kashif Durrani and Bahadur Ali.
Concerned officers have been directed to submit written clarification within 24 hours. Sub divisional forest officer Agha Hussain Shah has been suspended on substandard arrangements in Changa Manga and Secretary Forest has issued suspension notification in this regard.
Usman Buzdar said that he considers people’s problems as his own problems. No leniency will be tolerated n the projects of public welfare.
Those officers who will fail to deliver will go home. He said that enough is enough now every department will have to deliver. He said that he will go to the last extent for improving the matters of the province. He said that he will come with the agenda of public service no one will be allowed to create hurdles.— PRESS HANDOUT

PM Imran Khan Arrives in US On a Week-Long Trip, Will Address UNGA