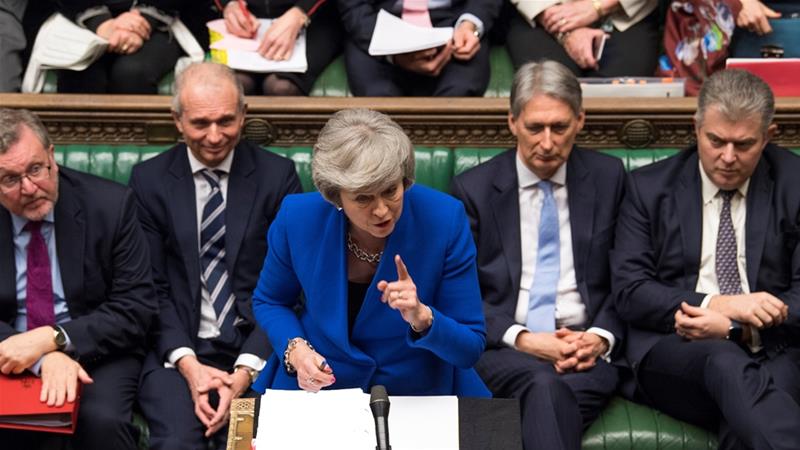 LAHORE MIRROR (Monitoring Desk)– Embattled British Prime Minister Theresa May survived a no-confidence vote on Wednesday, a day after members of parliament dealt a crushing blow to the Brexit plan she negotiated with the European Union (EU).

Parliament members voted 325 to 306 against the motion called by opposition Labour Party leader Jeremy Corbyn, who had earlier urged May to resign.

It was expected that May would survive the vote, after she secured the backing of her own party’s rebels and the small Northern Irish Democratic Unionist Party (DUP), which props up her minority government.

“I am pleased that this House has expressed its confidence in this government tonight,” May said. “My government will continue its work to increase our prosperity, guarantee our security and to strengthen our union.”

With her leadership secure for the time being, May has to decide the next step, as the March 29 deadline for Brexit looms. For the first time, May said she is willing to talk to the leaders of all opposition parties to reach a deal.

Earlier on Wednesday, she ruled out calling a general election, saying that it would be the worst thing Britain could do now.

The other options on the table are a second referendum, a renegotiation with the EU or an EU departure without a deal.

May pledged to work with senior politicians to find a compromise that would avoid a disorderly “no-deal” Brexit or another referendum on membership.

During the debate on Wednesday, Labour’s Corbyn said that the Brexit vote on Tuesday night has left May’s government ineffective to deliver on her promise.

“This government has failed our country. It cannot govern, it cannot command the support of the people, facing the most important issue at the moment, which is Brexit,” said Corbyn, who opposes a second referendum.

Following the vote on Wednesday, Corbyn called on May to “remove clearly” the prospect of a “no-deal” Brexit, “and all the chaos that would come as a result of that”.

Labour’s finance spokesman, John McDonnell, said May could eventually get a deal through parliament if she negotiated a compromise with the opposition party, which wants a permanent customs union with the EU, a close relationship with its single market and greater protections for workers and consumers.

But May’s spokesman said it was still government policy to be outside an EU customs union, while May insisted Britain would leave the bloc on March 29, leaving little time for a solution to be found.

Brexit Controversy: Theresa May Survives No-Confidence VoteEUParliament members voted 325 to 306 against the motionwilling to talk to the leaders of all opposition parties to reach a deal
346
Share

UK Travellers Could be Barred From EU Entry on January 1