LOS ANGELES– Mike Tyson stepped through the ropes in his signature black trunks and heard the opening bell in a boxing ring for the first time in 15 years.

The former heavyweight champion of the world traded lively punches with Roy Jones Jr. for eight entertaining rounds that ended with two middle-aged legends wearily hugging each other in mutual admiration.

Their fight was only an exhibition, and it ended in a draw. But for Tyson, the experience evoked the joy and excitement he felt so long ago at the start of his boxing career — and it was likely the start of a new chapter in his epic life.

“I’m happy I’m not knocked out,” Tyson said. “I’ll look better in the next one.”

Tyson showed glimpses of his destructive prime Saturday night during the 54-year-old boxing icon’s return to the ring against the 51-year-old Jones.

Tyson had the most impactful punches, showing off versions of the footwork and combinations that made him the world’s most feared fighter. After eight two-minute rounds, both Tyson and Jones emerged from Staples Center smiling and apparently healthy. 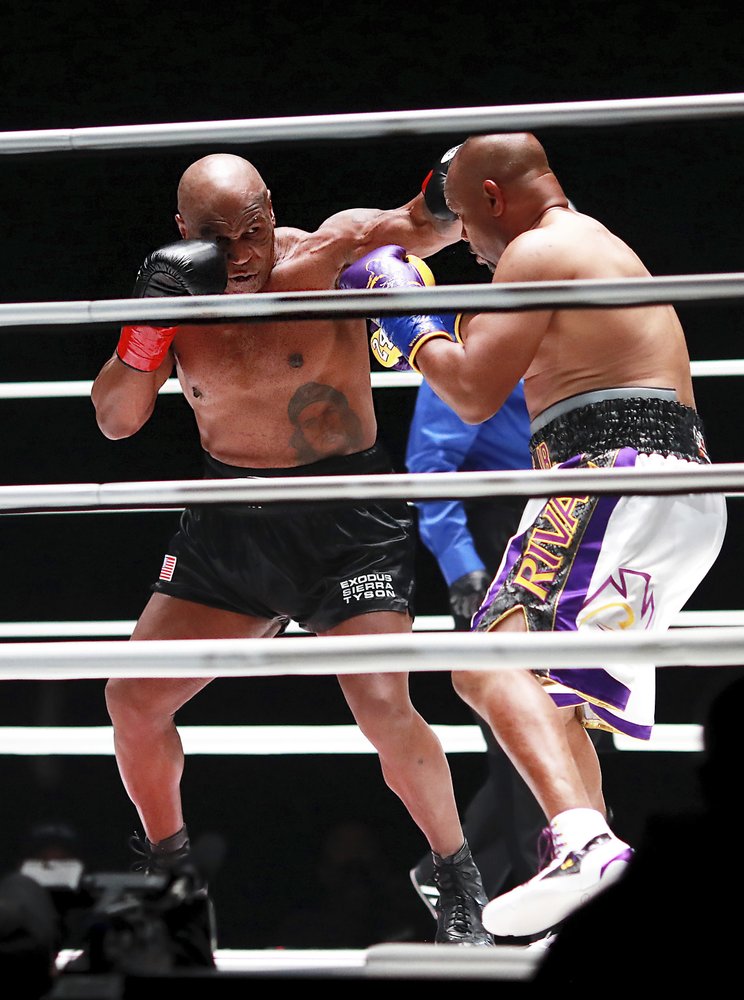 “This is better than fighting for championships,” Tyson said of the heavyweight exhibition, which raised money for various charities. “We’re humanitarians now. We can do something good for the world. We’ve got to do this again.”

Tyson’s return to the ring for this show attracted international attention, and Iron Mike did his best to demonstrate his months of work to recapture a measure of the form that made him a legend to a generation of boxing fans.

Tyson tagged Jones with body shots, head shots and a particularly nasty uppercut during a bout that was required by the California State Athletic Commission to be a reasonably safe, glorified sparring session.

Tyson was exhausted two hours afterward, but also clearly energized as he recounted his emotions with his wife and team looking on.

“I took my youth for granted,” Tyson said. “This event made me find out what I was really made of. … My body feels splendid. I want to beat it up some more.”

Tyson intends to fight in more exhibitions next year, perhaps heading to Monte Carlo next to challenge a European fighter. He didn’t close the door on the possibility of a full-fledged comeback, although that would be many fights in the future.